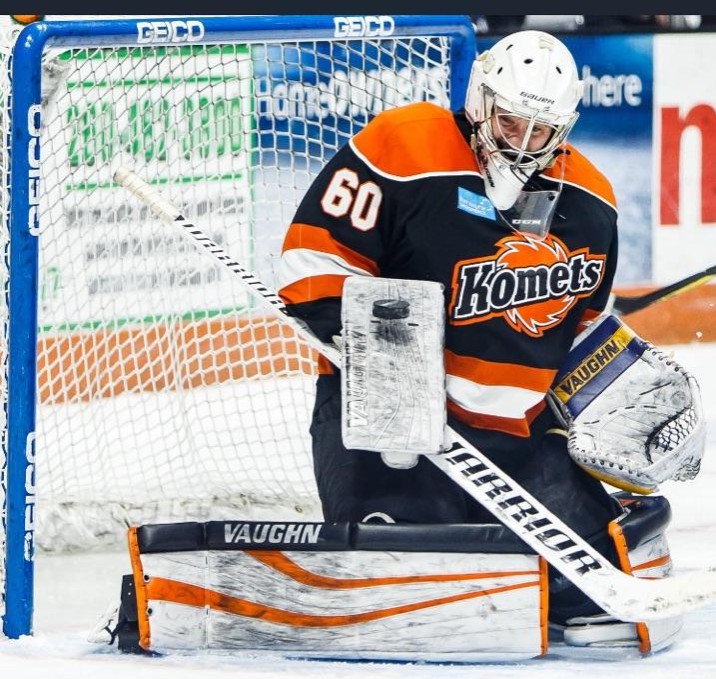 From 3 to 1 | The Ups & Downs of a Professional Hockey Season.

As the youth hockey season winds down and everybody looks to their busy spring schedule and summer planning, it’s important to reflect upon your year and assess how you handled yourself. At one time or another, I bet you found yourself in a similar situation as Garrett Bartus did, and his story will resonate and provide valuable information about how to conduct yourself like a professional when times get tough. In his own words; a great example of mental toughness and patience.

Very few seasons in my hockey career have been drama free, and this year has been no exception. At the time of writing this we have 21 games left to play, we sit first in our division with two games in hand on the first place team, Toledo. My record is 13-2-1 to go along with a 2.64 GAA and a .905 SV%. It’s been a very successful year with the most exciting part of the season on the horizon, playoffs! Though it seems like things for me personally have been smooth sailing, the waters have been rough at times, and one challenge in particular has been unlike any other I’ve faced in my career. I want to share that with you in hopes of teaching a valuable lesson to the goalies who have or will go through something similar. Bartus and Nagle, former teammates and still good friends, share a few words before competing against one another in the ECHL

The night before a road game in Quad City earlier this season, I caught wind of news that our parent club, the Arizona Coyotes, made a trade involving goalie Sean Maguire (NHL contract, former BU goalie) being sent over from the Pittsburgh Penguins. As so often these types of trades do, it had implications all the way down to the ECHL level. Here in Fort Wayne, we are assigned players by either Phoenix in the NHL, or more commonly Tucson in the AHL. We already have Michael Houser (assigned by Tuscan right out of training camp), who is having a career year – already racking up 22 wins, which is 1 shy of former MGS Advanced Camp Instructor, Pat Nagle. Coincidently, Pat was my goalie partner in Fort Wayne last season and both are tremendous goalies that I have learned a lot from playing with.

The recently acquired Maguire (under NHL contract) joined Houser (under AHL contract) and myself (under standard ECHL contract) to create the ever-so-fun three goalie carousel. Sean ended up traveling into town late that day so Coach kept to his schedule and gave me the start. I played the game, but no matter how hard I tried, I could not let my mind relax and find that “flow state” which has become so crucial for my success. I couldn’t’ stop thinking about the inevitable; my time in Fort Wayne was about to end. The team played great and lifted me to a 5-4 OT victory and I guess that’s proof that for as many times as we [goalies] bail the team out, they return the favor with offense like that. Over the course of the next month, I was the clear cut 3rd goalie, and spent a lot of time in the stands watching the game instead of being involved in it. You’d think that was the most devastating part, but it was actually the practice situation that got to me the most. I was having to basically split the net with Maguire as Houser was sort of taking his own net as the starter (as he should). I went from getting 50% of the shots to about 30% and had very limited Power Play reps and other important game situation type drills. Houser was rolling his way to goalie of the month while I was trying to roll a boulder up a mountainside cliff.

I spent time talking with people in my circle who gave me advice on what to do, how to handle it both on the ice and off. I debated if it was the right thing to stay in Fort Wayne and “grind it out” or demand a trade and try to find a more suitable situation for myself. When push came to shove, I love it here in Fort Wayne so much and they have treated me very well (which isn’t the case with every minor league team), and I felt loyal to the group of guys in the locker room. Leaving for selfish reasons felt like I’d be abandoning a team that I was 100% confident could make a run at an ECHL championship this season-I wanted to be a part of it. I also looked at this opportunity as a challenge to see how mature of a player and person I’ve become because how I act was going to reveal a lot about my character.

For as quickly things can change in minor pro hockey, all of the sudden a gift from the Hockey God’s fell into my lap. It turns out that a goalie in Utah (ECHL) jumped ship mid season to play in Europe, and instead of their affiliate team filling the permanent void, Arizona ended up being the team who had an extra goalie to place. (You see, it’s a funny business because while you are technically under contract with two particular teams, you can also be “loaned” to a different ECHL team if that’s what the GM’s agree upon). It’s ironic how a goalie situation literally across the world can have impact on me playing here in the states. Hockey is a small world and this is an example of how sometimes “things find a way to work themselves out if it was meant to be.” I was starting just my second game in a months time since my 5-4 win in Quad Cities, and we were playing the perennial Allen Americans, a team that’s won 3 of the last 4 championships. I wasn’t nervous, but I wasn’t exactly not nervous considering I’d seen such little action and hoped there were no signs of rust. We won 4-1, and then I got the start the very next game in Indy, which we also won, and I was finally back in the mix! We go into the next weekend and lose Friday night with Houser in net, so I get the start for a huge game against our divisional rival, Cincinnati. On the road, we pulled out a big 6-3 W, and I came up with some big saves at key times, it felt so good to contribute again and truly feel a part of the team.

In another surprising turn of events just days later, Houser got called up to Tuscan and there I was, the only goalie in Fort Wayne. It was one of those moments where I finally got to take a step back and look at the events that transpired from a ‘big picture’ perspective.

[I thought to myself how crazy this position is and how getting caught up in the little ‘day to day’ stuff is counterproductive because over the course of a long season, the bad can be washed away by the good as quickly as it comes]. What I was so concerned with at one time came to be a blessing in disguise because it expanded my level of appreciation for the net when you have it, and sort of made me just be thankful for what I have instead of what I don’t. Things in life can always be a little better, but your well being is more about what you make of it. Bartus gets some help from a teammate who’s willing to battle & sacrifice to keep the puck out of the net.

I went 3-0 while Houser was called up and never had more fun doing so. I went from being a third goalie to going on a 6 game win streak in a matter of two weeks. It can change that quickly. It was an exhausting couple weeks, buts that’s the life of an ECHL, non contracted goalie. My final and perhaps most important lesson from this experience was personified in what one of my teammates said to me. He told me that he, along with the other guys, were so impressed by my attitude during that difficult stretch and how I was always a team first player, still being the last guy on the ice taking shots from anyone looking to get better and work on scoring, that that’s why everybody was playing so hard in front of me. It goes to show that just because something is happening to YOU, there are bigger and more important things to the success of the TEAM, and the name on the front is ALWAYS more important. I could have pouted and been sour about it, doing the bare minimum and showing signs of defeat, but I have too much pride and respect for the game. It’s not always something I realized as a younger goalie, but there are other ways to be a strong link on the team than just being the guy in net.

With the NHL trade deadline looming and playoffs coming up, who knows what will be in store for me for the rest of the season. It’s an exciting time of year, and all I know is that when my name gets called I’ll be ready to battle with my brothers. My advice to any goalie out there is just that; be ready for when you’re called upon, that’s the only thing you have control over.

Previous Post Undersized goalie with Oversized game: An Interview with Jake Hildebrand Next Post Why goalies are prone to develop hip injuries and what YOU can do to prevent them. Ben Miers, DPT shares his professional insight